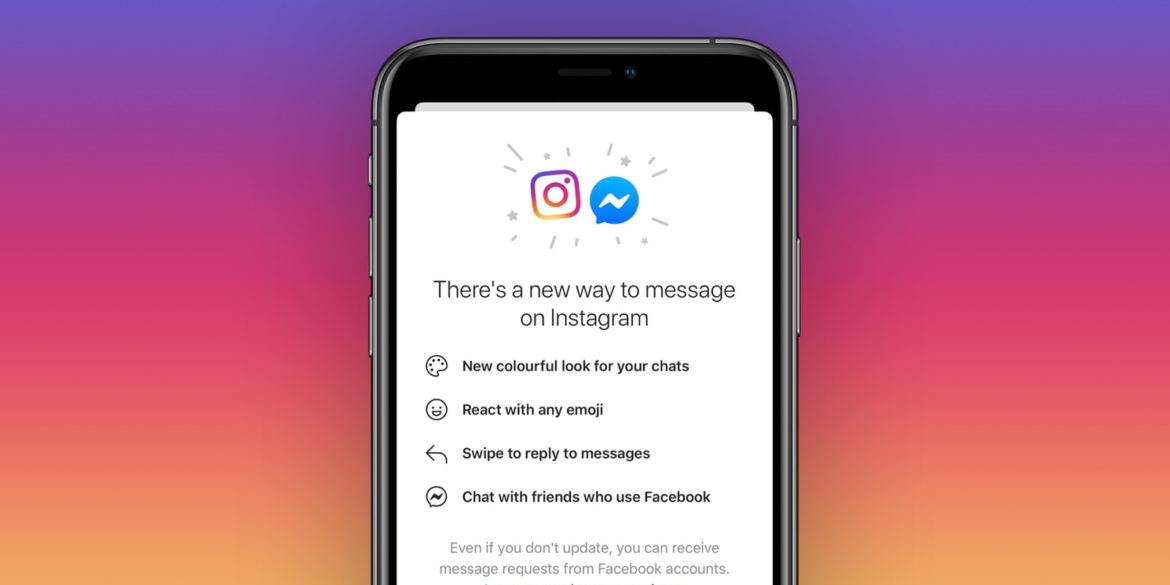 In a move to simplify its services and unifying its platforms, Facebook will be integrating the chat systems for Instagram and Messenger.

On both Android and iOS some users noticed an update screen that popped up in Instagram’s mobile app with the message “There’s a New Way to Message on Instagram.” It listed a bunch of new features from the update, with the headline feature reading: “chat with friends who use Facebook.”

Other features in the Instagram update include a “new colourful look for your chats,” more emoji reactions, and swipe-to-reply. While they are nice-to-have new feature, the fact that the integration process between the various messaging platforms in Facebook’s stable has started is significant. Facebook have been touting the simplification of their offerings from some time, with messaging being top of mind. Some have also posited that they will have an integration with WhatsApp, after reports in the New York times during the course of the last year.

According to CEO Mark Zuckerberg, they want their entire system to be end-to-end encrypted, even between the various integrations it is building. Facebook is rebuilding the underlying infrastructure so users who were on only one of its apps could connect to others using different Facebook apps.

Facebook isn’t going to take these services and merge them under a new single one. They’ll all continue to operate as standalone apps on your phone, but technical changes behind the scenes will be made so that they can more seamlessly work with one another.

By Theunis Jansen van Rensburg
In GamingTechnology
5 days ago

They have also integrated Messenger Rooms with WhatsApp on the web.

Facebook now has more than 3.14 billion users across its various services globally. It acquired Instagram for $1 billion in 2012 and WhatsApp for $19 billion back in 2014.