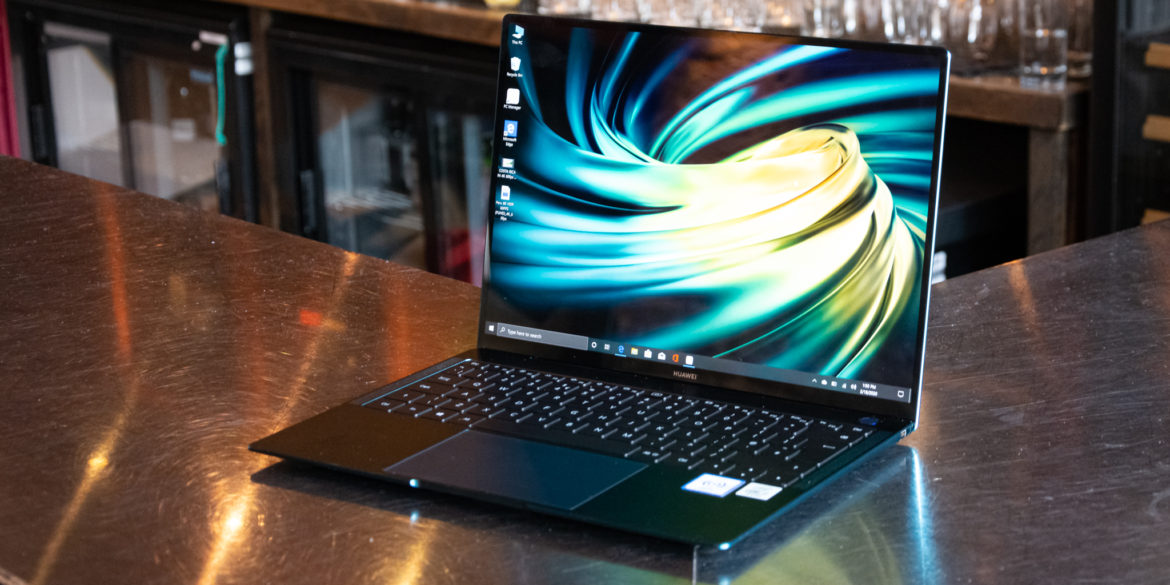 While Huawei may mostly be known for its smartphones, it has been building high-end laptops from some time and are hoping that the Huawei Matebook X Pro will launch it into the mainstream. It is a slim and compact netbook with high-end specs and hopes to take on the likes of Apple, ASUS and Dell in the South African market.

It doesn’t have any standout features to set it apart from the competition but tries to do all of the basics really well. It has a solid design with an impressive display, but can it be a Windows-based Macbook Pro alternative? Let’s find out as we deep dive in our Huawei Matebook X Pro review.

Let’s get the negative stuff out of the way. The gimmicky pop-up webcam is in the worst possible place it can be. Huawei claim that the added security is worth the trade-off, as you pop it back into the keyboard when it isn’t being used. However, the location and angle make it near unusable. You need to crouch down in order to be in view, and don’t even think about typing while using it, as it moves due to the impact on the keys and your fingers will always be in the way of the sensor.

The external charging brick is also a strange choice. It doesn’t fit in with the design of the laptop at all, but more importantly the brick is extremely large. Instead of have the AC adaptor separate from the plug like most laptops’, it is all in one like a phone charger. We understand its to make it more portable, but it could be a problem with limited charging outlets.

Otherwise, the laptop is superbly designed. It looks and feel expensive – which it is – and looks professional yet understated. If you want to use it as a work laptop you will probably need a dongle with extra ports, as it only has two USB-C ports and a single USB-A port, as well as a 3.5mm headphone jack.

It has one of the better keyboards we have ever used on a laptop of this size. While the keys themselves is little slippery, they have the perfect amount of travel and feedback for long periods of typing while remaining perfectly comfortable. The keyboard is supposedly splashproof, but we weren’t brave enough to test that.

The Huawei Matebook X Pro also has one of the larger trackpads for a laptop of this size. It may take some time getting used to for some, as you may get some accidental touches (especially from the right hand, I found) due to the large size. But is a great trackpad – it’s responsive and has good travel when clicking as well. The tactile feedback is much appreciated in a laptop of this size.

The top and the bottom covers of the laptop are made of aluminium and feels appropriately premium. However, the inside cover around the keyboard feels a bit plasticky, especially when used from long period of time. This helps with heat radiation, of course, and helps keep the weight of the laptop down.

One of the highlights of the Huawei Matebook X Pro is the 14-inch IPS touchscreen. It has a resolution of 3,000 x 2,000 pixels giving you excellent pixel density (271 ppi), giving you sharp text and detailed media playback. The 2K resolution and 3:2 aspect ratio means its great for word processing and spreadsheets and reading websites. The increased height in the screen makes any productivity easier to get done and is becoming the norm in workhorse netbooks.

It has a maximum brightness of 450 nits, which makes it usable outdoors, although very few will want to sit outside while using it. While it is usable outside, the amount of reflections from everything happening around you can be very distracting. We have seen this from Huawei laptops for a while, and it’s a shame. It negates the high brightness.

It has 100% sRGB colour gamut support and a contrast ration of 1500:1, and it translates to really good image quality. Blacks are dark enough (not quite as dark as would be on an OLED), and light colours offering decent brightness.

The bezels are impressively thin (largely due to the webcam being moved to the most unflattering location in laptop history). It adds to the premium look and feel of the laptop.

There is an ambient light sensor included to auto adjust the brightness of the screen. While it is nice to have, this particular one has a mind of its own. At times it seemed like it thought I was at a rave, because it changed the brightness every couple of seconds when the only shifting light close to me was that of a TV on the other side of the room. I saw similar oddities when using it outside. Therefore, I just switched it off and adjusted the brightness manually as I saw fit.

The 10th generation Core i7 is part of the Comet Lake family from Intel, which uses variable clocking for more efficient battery usage. The Matebook X Pro will throttle down the performance of the processor when it’s idling or being presented with the least difficult of tasks.

Huawei decided to opt for the Nvidia GeForce MX250 dedicated graphics card instead of Intel’s integrated graphics. It gives the laptop a bit of additional grunt, giving it more graphics performance for light gaming and photo editing.

Performance has been adequate throughout our time with the Matebook X Pro, even through periods of intense usage. The 16GB of RAM is more than enough for most people that aren’t going to do intensive video-editing. Intersetingly, though, Windows still stutters for a split second in some specific scenarios – like multi-selecting a few items on the desktop, then right clicking. The menu that shows up is always ever so slightly late, no matter how much processing power you throw at it.

The battery life is also pretty decent. We usually got about six to seven hours from a single charge of the MateBook X Pro’s 56Wh battery when using the computer for mostly work-related tasks.

There is a fingerprint scanner in the power button, which was very reliable. It is quick to use and still our favourite biometric authentication.

There is a speaker array on either side of the keyboard, which is rare to see these days. While its not the best speaker setup, the quality is good enough for content consumption and its location makes it sound better than laptops with speakers on the sides or front-bottom.

The Huawei Matebook X Pro may not be the most exciting device available, but the recycled design from previous models still works a treat. It looks and feels premium, even though it is ultra-portable.

It is hard to overstate its portability – it has a very compact footprint and is only 1kg in weight. It fits a large, bright 14-inch display into the small package. It also performs really well in the context of its target market.

So, on its own, it’s easy to recommend for workflows that don’t involve heavy video editing or gaming. Its price tag, regardless of which version you go for, is anything but affordable – our review unit costs R35,000 which is a lot to pay for what you get here.

Other options from ASUS and Dell offer similar, if not the same, specs for a lot less, which makes the Huawei Matebook X Pro difficult to recommend.