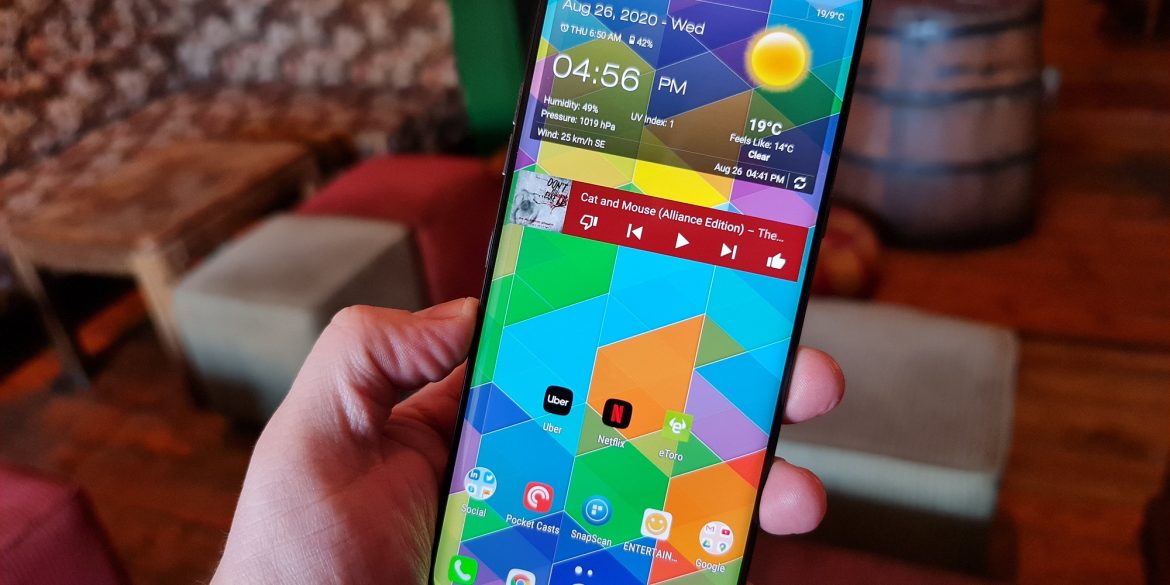 It isn’t often that a company completely changes its design language, especially on its flagship range of products. While LG’s smartphones have always been decent devices, they haven’t attracted attention through stunning good looks or knock-out features in recent years. That was, until they launched the LG G8X ThinQ which had that impressive second screen included at no extra cost.

So next LG wanted to tackle its design problem. Since the LG G6 their design language has been relatively bland and boring. Then steps in the LG Velvet – a new naming scheme, and brand-new looks appealing to the hip and fashion conscious.

In our in-depth LG Velvet Review, we explore this new design language and how it translates in everyday use. We also see if it has been paired with proper innards and whether it delivers a great experience all-round.

When you first lay your eyes on the LG Velvet you would be warranted in thinking that this is an awfully expensive phone. It has a really big display with a long aspect ratio, which makes it feel tall. It has a glass back with curved glass on both sides of the device. You won’t find any plastic anywhere near this device – with the main camera bump and sides of the device made of metal.

The metal sides feels quite different to what we’ve seen on other devices, interestingly. They have prominent lips at the corners, which gives it a unique feel in the hand. While it doesn’t have the minimal bezels we’ve come to expect from the likes of Samsung, it still looks and feel very expensive from the front.

The back of the device, while not as exciting, again has a very unique look to it. The camera array can be found at the top left corner, like many other phones, but the camera module design in very different. In fact, you could argue there isn’t a module at all, as each camera is distinctly separate. It forms a “raindrop” design, with each subsequent sensor being smaller than the last. If you were to line it up next to many other phones, it would definitely stand out more so than others.

On the right side of the phone you find the power button, while on the left are the volume buttons (which are two separate buttons as opposed to a rocker) and a dedicated Google assistant key. We’re huge fans of having that dedicated Google Assistant key – it is less cumbersome than opening it form the software or using a keyword. We found ourselves using the Assistant a lot more as a result of having that button.

At the top you have the SIM tray which includes a microSIM card expansion slot. On the bottom is you USB-C port an average sounding speaker and luckily still a headphone jack. LG is one of the only manufacturers that still include a headphone jack, which we always commend, but unfortunately, they chose not to include the quad DAC in their latest flagship.

We don’t have any complaints when it comes to the design of the LG Velvet. It is their best looking device in years and the complete redesign is sure to entice many more people than their past couple of devices.

The LG Velvet stands out not only because of its design, but also because of its main display. It has a very tall aspect ratio, coming in at 20.5:9 resolution.

It has a teardrop notch that houses the selfie camera. While we would have preferred a hole punch cut-out like we find on most other flagships, the fact that the display is so tall makes it less of an issue here. When watching video content, most of which has the widescreen aspect ratio of 16:9, there are small black bars on either side that then hide the notch.

The display is a 6.8-inch panel with a 2460 x 1080 resolution. This is where the sacrifices that LG chose to make with the Velvet start creeping in. The fact that we don’t get a 1440p display will be a turnoff for some. Luckily, it is of an OLED variety which is always preferable. While the panel isn’t as good as Samsung’s (which has been the world’s best for years now), it is still perfectly good.

Some may miss the extra solution that other flagships offer but is we haven’t really bemoaned the 1080p resolution. It still has great colour recreation, with vivid saturation and tone that can be adjusted in the settings. It also has HDR capabilities, rounding out the experience.

While we don’t mind the lower resolution, the standard 60Hz refresh rate is a point of concern for a flagship these days. Choosing to include at least a 90Hz display would have proved pertinent, as it simply doesn’t feel as smooth as other flagships at the moment.

The LG Velvet has the same dual screen functionality they have included in their flagships these days, all included in the box. The experience has remained identical to the previous flagship, so check out our review of the LG G8X ThinQ here to see how it works and what you can do with it.

There is no getting around the fact – the LG Velvet doesn’t have flagship hardware. It is less powerful than its last major smartphone release, the LG V60. They have opted for the Qualcomm Snapdragon 765G instead of the significantly more powerful Snapdragon 865, which is ubiquitous among flagships in 2020.

They opted for this chipset in order to save money, but it is also the only mid-range chipset (at the moment) that offers 5G connectivity. This chipset saves space as well – one of the reasons why the device is so thin.

They also gave this device 6GB or RAM, as opposed to the 8GB that has become standard among flagships. It also has 128GB of storage, that is expandable by up to 1TB with a microSD card.

Using this device day-to-day is a bit of a mixed bag. It doesn’t feel as snappy as other flagship devices on the market today. While some minor sluggishness isn’t that bad every now and again, we saw some noticeable delay and stuttering, especially when switching between apps. Opening menus was frustrating at times as well. It isn’t a deal-breaker, but it isn’t what we’d expect from a headlining device in 2020.

The Velvet has a 4,300mAh battery, which is a relatively large cell when you consider how thin the device is. While that is commendable, we would have assumed better battery life with that capacity. At times we struggled to get through a full day, without exorbitant usage. A normal day with browsing, some phone calls, plenty of texting and watching YouTube videos got us to about 9PM before needing a top-up.

Those top-ups will also take you quite some time, unfortunately. It is surprising given that you have an 18W charger included in the box, but even with that it took more than two hours to fully charge. This is very disappointing, given other devices with similar capacity and the same speed charging brick will be much, much quicker to charge.

By Theunis Jansen van Rensburg
In EditorialGadget ReviewsGadgetsPopularReviewReviews
7 days ago

When you look at marketing material of the LG Velvet, you get the idea that this device is meant for social media influencers and content creators. So that would mean the cameras are the standout feature, right? While LG would like you to believe that, the camera experience is remarkably mediocre.

The Velvet comes with a main 48MP f/1.8 camera, a secondary 8MP wide angle lens with f/2.2 aperture and finally a 5MP depth sensor with a f/2.4 aperture.

A short TL:DR review of the cameras would be – they’re okay. There is nothing impressive or special about them, with any one of the lenses or in any mode, but its all passable. The phone tends to underexpose images and the dynamic range is very muted. Colours are generally washed out as well, which isn’t something you see very often in Android devices.

The images are always soft, most likely because the image sensors aren’t getting enough light to process them. This is due to the chosen sensors being markedly smaller than you find on other phones, a puzzling choice.

The zoom isn’t really usable, as images become extremely muddy and lacking in detail when you zoom in past a 2x zoom. It can theoretically go up to 10x, but there is no point – images simply fall apart when zooming in that far.

The portrait mode is also very disappointing, as you can see from the image of our own Bryan Smith above. It is one of the worst implementations we have seen on a high-end device – there is an entire halo around his head and even shoulders, which makes the mode generally unusable.

When we first opened the packaging of the LG Velvet we were truly excited. For the first time since the LG G4, we were fully on-board with the design of the latest LG flagship.

The design is impressive. It feels like a much more expensive device than it actually is. In the hand it is one of the most comfortable devices on the market today. It’s slim, sleek and very thin for a modern flagship device. The build quality is also very impressive – we’re truly happy LG decided to shake up its design.

However, the rest of the device is generally mediocre. The biggest disappointment has been the camera experience. With washed out colours and unusable supplementary modes, there isn’t anything to write home about. Luckily the main camera isn’t bad.

The LG Velvet was one of our most anticipated devices of 2020 but hasn’t lived up to expectations. It is cheaper than other flagships, which will help it appeal to more people, but we can’t get around the major sacrifices LG has made to give us their first sublimely designed device in years.