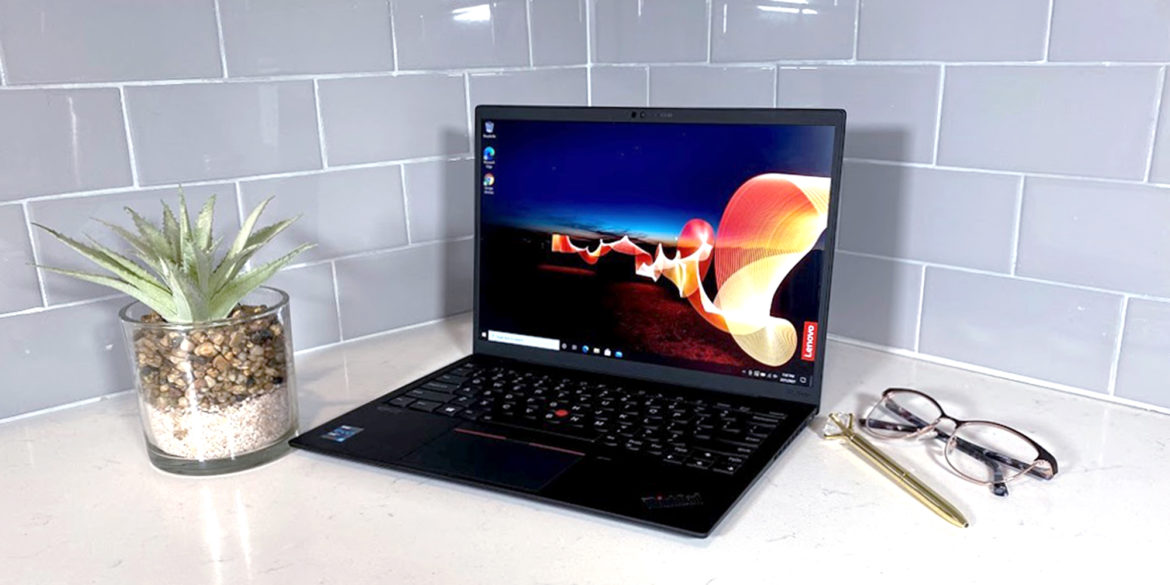 When Lenovo ventured into a new product segment with the ThinkPad X1 Nano, we were intrigued. They have taken a business focused laptop and made it smaller, with a unique-feeling design and featherweight build with carbon fibre and magnesium as the shell.

At first glance the Lenovo ThinkPad X1 Nano appears to be like any other small business laptop. Pick it up, however, and those notions are immediately shattered. The build is very high quality, but very light at the same time. The chassis is made of carbon fibre and magnesium, combining the best qualities of the two to make this laptop feel like something new.

Magnesium is strong, but soft, and can usually be scuffed up quite easily. This is not the case here, with the carbon fibre adding the strength needed to be comfortable it won’t get banged up easily.

At the bottom is an air vent for cooling airflow, which may seem like an odd position for hot air to escape. However, when the laptop is opened, the display panel’s hinges lift the laptop’s far edge off of the surface, allowing air to flow away from the user. When opened, the keyboard it also turned towards the user slightly, making it easier to use. It is a simple, yet elegant design choice. The hinges also turn a full 180 degrees, meaning that the display can be opened all the way to the surface to make the device completely flat. This is meant to make collaboration simpler, although we can’t think of many use cases where this would be useful.

Taking into account how thin and light this laptop is, you wouldn’t expect the keyboard to feel great to type on. After all, there won’t be much travel in the chicklet-style keyboard with so little space to play with. We were pleasantly surprised, though, as typing on the ThinkPad X1 Nano feels comfortable, if not remarkable. The traditional Lenovo red pointer button is still in the centre of the keyboard and is as responsive as ever.

While the keyboard is comfortable to type on, it does have one significant flaw – the placement of the function key (Fn). It is the first time we’ve ever used a Windows laptop where the function key is on the furthest-left bottom of the keyboard, which shifts the left control button to the second button from the left. It may seem like a minor complaint, but after many years of conditioning and muscle memory kicking in, you hit the function key instead of the control key A LOT. The traditional placement of the control key is so engrained, after two weeks of regular use I would still hit the function key many times a day. I’m not sure how long it will take most people to get used to.

The X1 Nano has a peculiar trackpad, as well. It is relatively small, with the size diminished by separate left, middle and right buttons at the top of it. We would rather have had a larger trackpad, as clicking on it in the bottom left or right sides of the trackpad works just as well as a physical button.

There are less ports than would be ideal. On the right-hand side there is only the power button and some more air vents. On the left you only have two USB Type-C ports and a 3.5mm headphone jack. We understand it is difficult to include many ports in such a compact form factor, but have to lug around a separate dongle defeats the purpose of having a small machine.

The X1 Nano has a surprising array of speakers, however. At the top there’s two tweeter speakers, while there are two bottom-firing woofers. It is some of the best sounding speakers in a laptop, especially given the size. It also has Dolby Atmos certification, bumping up its credentials further.

In smaller laptops there is often a problem with image brightness on the display. We are happy to report that this is not the case with the Lenovo ThinkPad X1 Nano. It has a 13-inch 2K display (2160 x 1350p resolution), with anti-glare glazing, which gives it a matte finish.

The colours are bright and vibrant, while the blacks are deep and true. While some top-end laptops are shipping 4K displays these days, at this smaller size we don’t feel it’s necessary. It is very sharp, and detail is as crisp as you’ll find on a display this size. It produces 430 nits of brightness, which is in line with the likes of the Apple MacBook Pro M1 and the Dell XPS 13.

Such a high quality display has one drawback – battery life. With heavy use, we were only able to get 4-6 hours on one charge. Luckily the device charges extremely quickly.

Cramming high-end hardware into a small form factor is no mean feat, but it pays off in the Lenovo ThinkPad X1 Nano. With everything we threw at it (other than intensive gaming) it performed really well. Holding the lightweight package in your hand you wouldn’t think it has punchy innards, but the Intel Core i7-1160G7 proves itself admirably time and time again.

Our review unit had 16GB of RAM, complementing the Core i7 with multitasking capabilities. We opened 30 Google Chrome tabs and played ten YouTube videos at 1080p simultaneously and it didn’t stutter once.

It comes standard with the Intel Iris Xe Graphics integrated graphics chip, which is in most Intel CPU’s these days. As such, it doesn’t have a dedicated graphics card and isn’t meant for gaming. However, it helps with image and video rendering, which will be important for many looking to buy a laptop of this kind.

The 720p webcam is about as good as you would imagine, but importantly has a physical shutter if you are concerned about privacy.

Our Lenovo ThinkPad X1 Nano review period has been a treat. It offers solid performance as a business laptop, a great display and comfortable typing experience. The battery life was only mediocre, but with its quick charging capabilities it shouldn’t affect your productivity.

The X1 Nano has achieved what it set out to – being portable, powerful and smart.