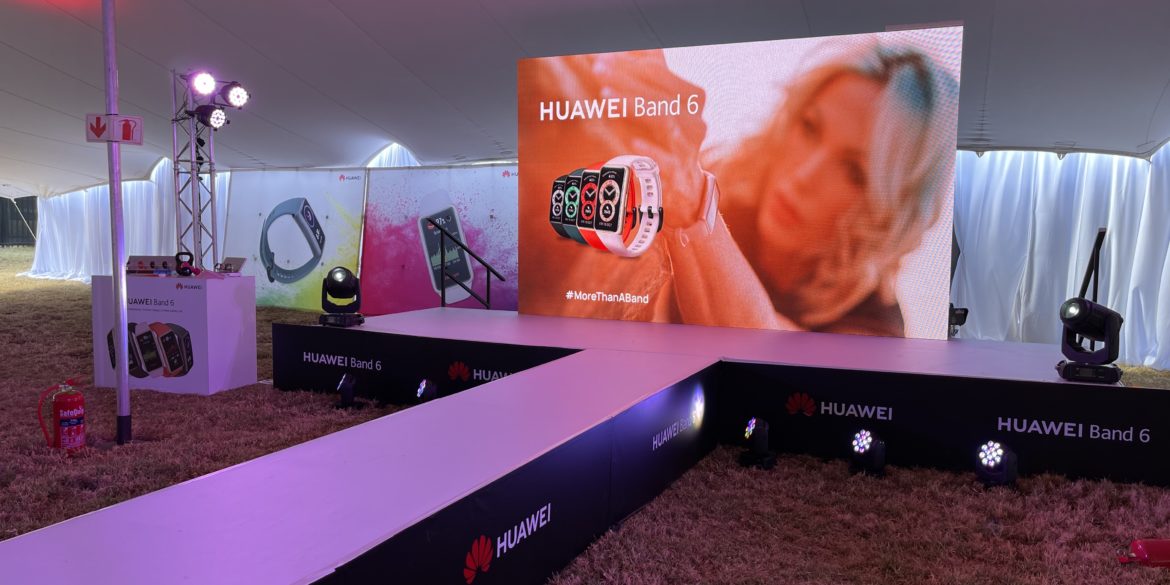 Huawei had an exciting launching event for its new smart wearable tech, the Band 6, and Bandwidth Blog was there.

On Thursday, Jun 3rd, 2021, Huawei held its Band 6 unpacked event at Eskom’s Megawatt Park in Johannesburg. It did what most tech companies set out to do when they host these events: Announce shiny new products, and get customers stoked.

Faced with the logistical challenges of Covid 19 enforced safety measures, the event was held outside on a frosty June morning. I was totally underdressed for the event with the wind sniffing and snarling at my back. Like many of my esteemed media compatriots, I quickly moved my chair to the relative safety of a sunspot.

Keeping an eye on proceedings, I could see that the cold did little to damp the spirits of the Huawei launch event. There was an excited buzz in the air, like a beehive hit by a soccer ball.

The food stalls were manned, by the brave soldiers of cuisine – bracing the wind in order to dish up mini-doughnuts, hotdogs, champagne, cappuccinos, and the weirdest fruit juices I have ever come across.

As part of the launch, the players from Supersport united FC club were in attendance, dressed as football players were – when playing on a sweltering pitch, in the middle of January, playing in Uppington. This was due to the fact that Huawei is one of the sponsors and now the sole provider of wearable technology for the club. Yet, looking at the fate of these elite athletes on that very cold morning, it was one of those rare occurrences, where I was grateful to have been blessed with two left feet and absolutely zero ball sense. And so, from the relative safety of my sunspot, I watched the freezing players cluster around the cappuccino machine waiting for the event to start.

It started late (these things almost always do). And by the time all the honorary guests arrived, the snacks from the food stalls had been decimated, the coffee had been drained, and my hands and feet were numb from the cold.

A kick-off for the proceedings was done by Justin Sun, General Manager of Huawei Consumer Business Group of South Africa. Justin gave us a brief overview of the evolution of the Smart wearable market in South African. Listing the individual successes of previous iterations of smart wearables and the overall market dominance from Huawei since their entry into the South African market in 2018.

Justin made it clear that Huawei in South Africa was a big-game player.
And that brought about the announcement of their new ‘fox in the box’ the Huawei Band 6. The Band 6 is an aggressive play from Huawei for growing their dominating market share in the smart wearables section in South Africa even further.

The ploy is a simple yet compelling move:
The greatest barrier to entry in the smart wearables market is price.
The question becomes: How to get smartwatchesque functionality and experience at an accessible price point? Justin, along with Akhram Mohamed (CTO of Huawei Consumer Business Group in SA) were convinced (and very convincing) that Huawei has cracked the recipe for success with the Band 6.

So you want to join the Band?

Sporting a tall AMOLED screen, a two-week battery life, and a string of useful fitness and health features, the Huawei Band 6 is priced at R1699-00.

The device looks and feels like a slightly trimmed-down version of the Huawei Watch Fit (think slimmer Watch Fit with a tall display but a more compact casing). The Band’s polymer body has a nice metal texture finish around the side and a matte plastic finish at the bottom where it houses its sensors. The straps are rubber with a soft and smooth texture with a pleasing feel.

The Band 6 seems to be primarily aimed at the fitness lifestyle market, seeing as you can track a wide array of workouts with the device. It also has plenty of health tracking options and functionality such as all-day heart rate, stress monitoring, SpO2 monitoring, and sleep tracking. Making use of enhanced algorithms, the Band 6 can detect some 96 workout modes, including 11 professional workouts. The list is vast – indoor and outdoor running, cycling, skipping rope and the unit is even capable of detecting the activity of various ball games and even dancing.

The important question for South African consumers who form part of the Discovery vitality community – yes it seems that this device will help you to obtain those much-desired Vitality points. We even got to see a video presentation done by Joe van Niekerk, the CIO of Discovery Vitality, to expound on the partnership that the Discovery Vitality program has with Huawei fitness wearables.

Bottom line: With the Band 6, you can get those Vitality points, and as a possible side-effect, you might just end up becoming fitter and healthier.

So after the detailed presentations on market segmentation, the watch functionality, and the partnership announcement with Supersport United FC, we were treated to a fashion show and various silly activities, accompanied by the usual entourage of local celebrities.

I decided that this was a good time to sneak away and so I did the freezing white-walker shuffle all the way back to the car, where I fumbled with my keys until I could mercifully crash into the driving seat and blast the aircon until I was sure that my fingers were thawed enough to grip the steering wheel for safe driving.

It was exciting, it was fun, it was cold.

So if you are on the lookout for a stylish fitness wearable device with loads of features at a competitive price, the Huawei Band 6 might just be the device for you.
You can pre-order your Huawei Band 6 from the 11th of June 2021 from Huawei Online Store, and from selected retailers across the country. The device will go on sale on the 18th of June nationwide.