App of the Week: Dropbox (Still as Good as Ever)

Dropbox has been available for a while now,  but there are still some people out there that do not know about it, but also it is still a best of breed solution. So here is quick primer on all things Dropbox.
Like many people these days, I work across many machines in a typical workday. While I might have a Windows 7 machine at the office, I have a Mac at home and I backup all the computers to a Windows Home Server in the cupboard.
I have a few “œessential“ folders that I always want to have access to (things like finances, insurance info, passport copies, contracts etc.), regardless of which computer I am working on, and yes it can become a hassle having to keep them all in sync, especially if you have to walk around with a flash disk to each computer. And the best way to do it is with DropBox.
Multiplatform
Dropbox installs as a simple app on your Windows, Mac or Linux machine and then keeps track of all the folders you drop into it. Now at first you only get 2GB of space for free, if you want more you have to pay for it. But as a method to keep essentials like word, excel and PDF docs, it works great. I installed Dropbox on my Macbook first, and it just creates a simple Dropbox folder into which you throw your documents. Then as soon as you find an internet connection, it simply uploads those files to the Dropbox server, which can then be accessed from any web browser, you just need to log in. (Imagine being in a foreign country and needing some document ““ you can just pop into a internet cafÃ©“¦)
Keeping it all in sync

But the true beauty of Dropbox is the syncing ability. I installed Dropbox on my work machine, a Windows 7 workstation. You install dropbox, give it your login details, and just like that it downloads all your documents to that machine as well (luckily it work well with proxy networks as well). It just hides in the system tray and informs you if any files have changed every now and then. But the syncing is where it gets interesting ““ any change I make to a document gets uploaded to Dropbox, and then gets changed on all my machines that use Dropbox as well. In your window it just marks the updated folders with a small green tick if everything synced. It turns blue while updating.

I also have a Windows Home Server at home, so I was pleasantly surprised to find that Dropbox installs on it without any problems. While it might not give a WHS add in, you can install it using Remote Desktop. So now my documents are backed up instantly on that server as well, because it has an internet connection.
Sharing files:
Sometimes you need to share files to many people, but email is not the best platform. You can use dropbox to enable a “public” folder. You can then enable which people can access it, and then send them a URL directly to a file. This is particularly handy for larger file sizes – like say recordings of a meeting, which might be too big email. If you have a team of people who are working on a project, you can also set up folders that get shared with only the people you trust. If one of the teammembers changes a file, it automatically updates other machines which are part of the team.
What about bandwidth?
Now you might wonder about bandwidth usage, especially with SA‘s current broadband problems. Dropbox is pretty smart in that first looks for another dropbox machine on your local network, and then gets the file locally, without using the internet. And it always just uploads or downloads files that were altered, not your entire dropbox. 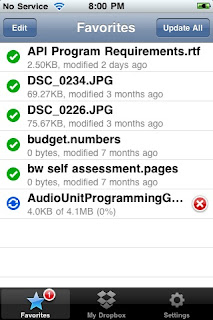 Accessing your dropbox from your smartphone
Then the cherry on the cake is that your dropbox can be accessed on your smartphone as well (currently on iPhone, iPad, Android and Blackberry). Just install it from the relevant appstore, and login again. And just like that you have access to your dropbox. Now this was the initial reason I started using Dropbox ““ I wanted some way to get access to my essential documents from anywhere using my iPhone. And it works a treat. You do however need a internet connection, but you can also select favourite files that gets stored locally on your phone. For example –  I mark my insurance papers, passport documents etc as favourites. That way I can access them even away from a 3G connection.
What would I like to change about Dropbox? Nothing really – but I do wish they can make more enterprise friendly products. I would think that policies to prevent users on a corporate network from sharing files using the public folder is just one example.
I am very impressed by Dropbox ““ it covers in the cloud backup of my documents, keeps my documents in sync on a variety of machines, and gives me access to my files from anywhere, be it from my smartphone or even a internet cafÃ©.
Give it a go here. Dropbox is free up to 2GB of storage, but they sell 50GB for $10 a month as well.


Disclosure: I was in no way, shape or form given anything for this review. I just find it a great product. (This post was previously posted by me on Mail & Guardian Techleader, but just got a few updates. There are alternatives available, but they do not come close to Dropbox for sheer ease of use and multiplatform compatibility. Yes, an oldie but a goodie!)